You are here: Home / Food / Plated Landscape 2017: Ohio City Farm and Refugee Response
I may receive a commission if you purchase through links in this post.

In what has turned into an annual tradition (six years running now!), we recently had the opportunity to attend a Plated Landscape put on by Spice Caterers. These are always one of the highlights of our summer/fall, and as usual, our expectations were exceeded.

This go-round was different both because of the early timing (June 2) and the location, an urban farm near the banks of the Cuyahoga River in downtown Cleveland. Granted, this is not 300 acres of amber waves of grain, but a farm it is, only nestled behind a large apartment complex. 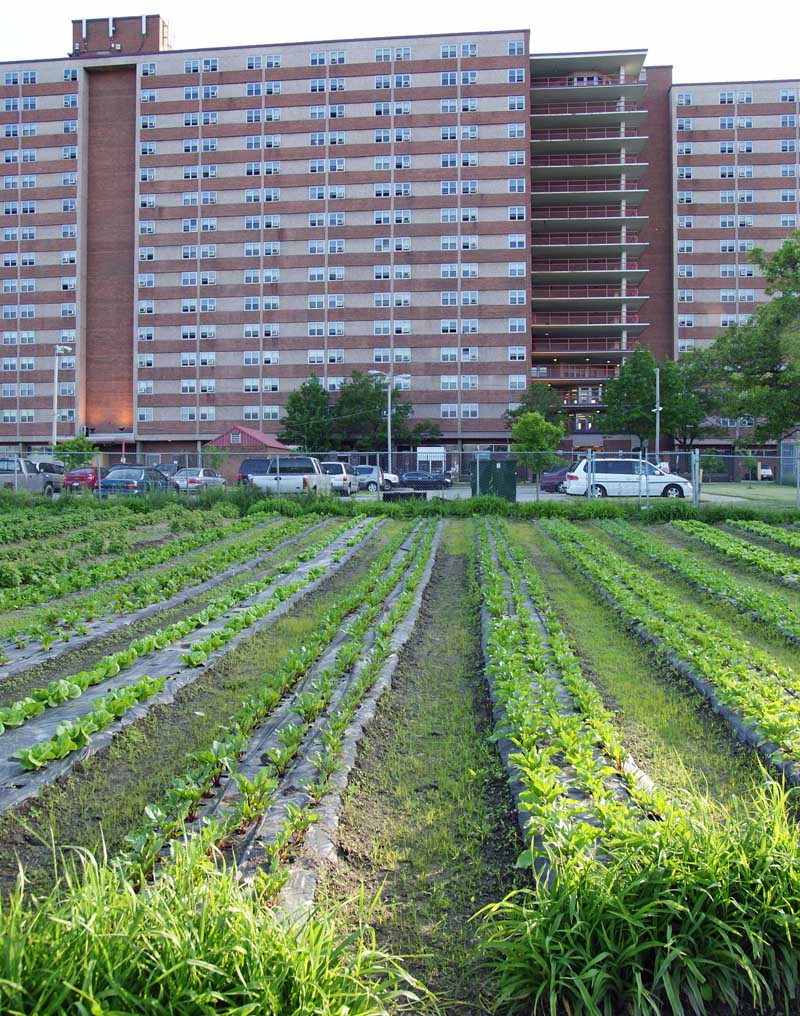 Ohio City Farm is one of the largest urban farms in the U.S. at six acres and offers some pretty amazing views of the Cleveland skyline, but what really sets it apart is the mission behind the produce. The farm is mostly operated by Refugee Response, an organization that provides meaningful work, training, empowerment, and so much more to refugees that settle in the area.

About a dozen refugees participate in the program during each cycle (just over a  year) – not only are they provided with the job, but each farmer and their families receive one-on-one mentorship, their kids are eligible for special tutoring, and they learn skills that help prepare them for their next steps. We had the pleasure of sitting near Patrick and Maggie during dinner, and although I’m sure they grew tired of our incessant questioning, we learned a lot from them! 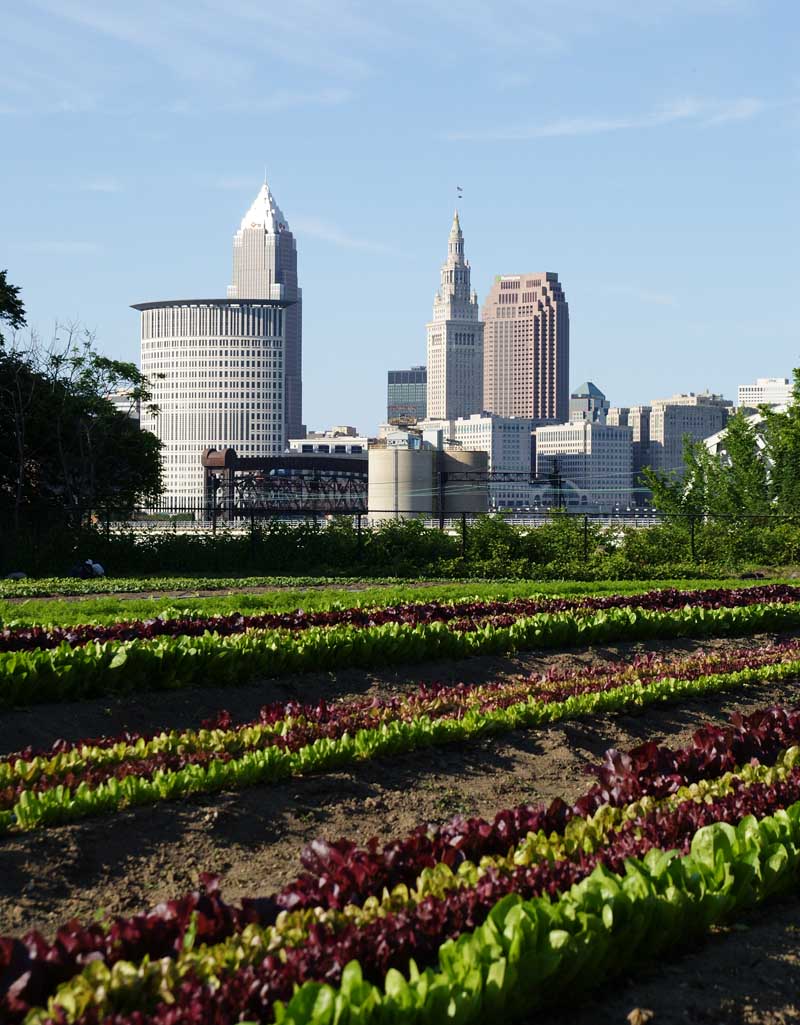 If you’re interested in stopping by, they open a farm stand during the summer and offer numerous opportunities for helping throughout the year if you’re the type who likes to get your hands dirty. They also hold a benefit dinner each year in late August (their primary fundraising event), and although circumstances have conspired against us for the past several years, we will make it eventually.

Obviously the farm’s setting is unique so space is at a bit of a premium, but they manage to squeeze quite a lot into the land available. Early in the season it’s mostly greens and other cooler weather crops, but much of the warmer weather vegetables had been planted as well, and they were in the midst of preparing additional land for peppers and tomatoes (because really, is there such a thing as too many tomatoes?). 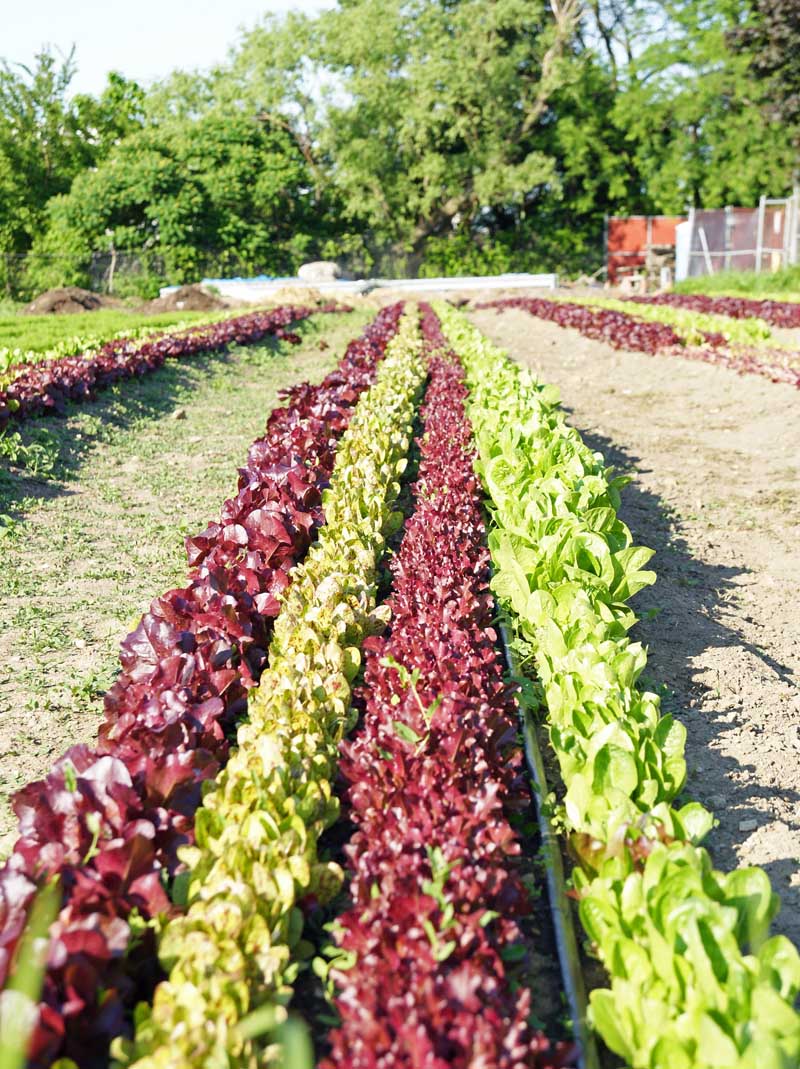 The early season also meant the menu was different from some others that we’ve seen in the past, with a focus on things like those greens, rhubarb, asparagus, and radishes. Definitely lighter fare, but no less delicious. 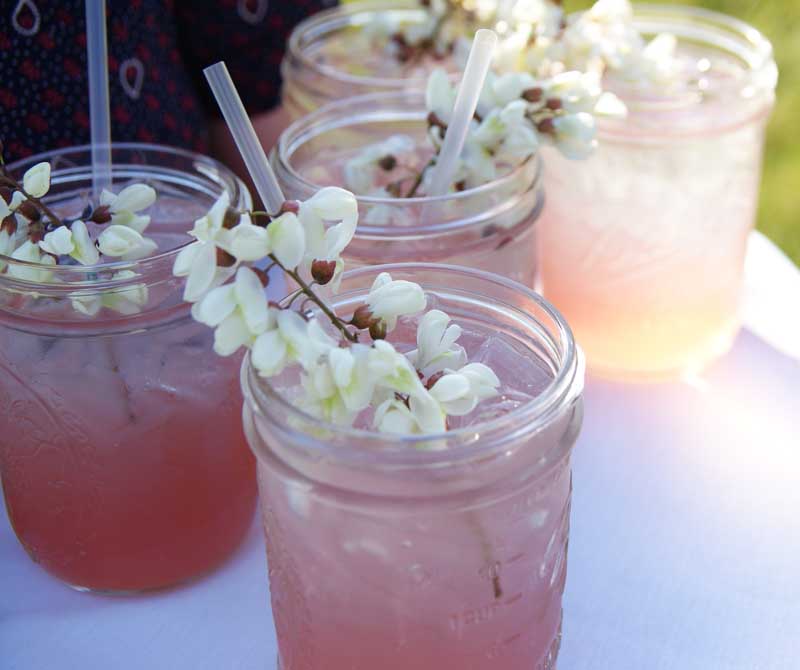 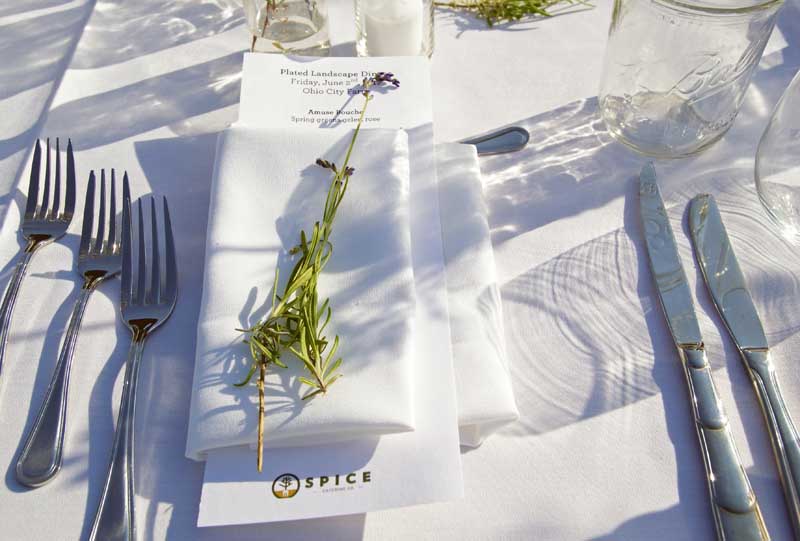 Starter: spring green gelee with candied rose petal. I can’t say I’ve ever made jello from spinach juice, but this was quite good, with a clean, fresh flavor. 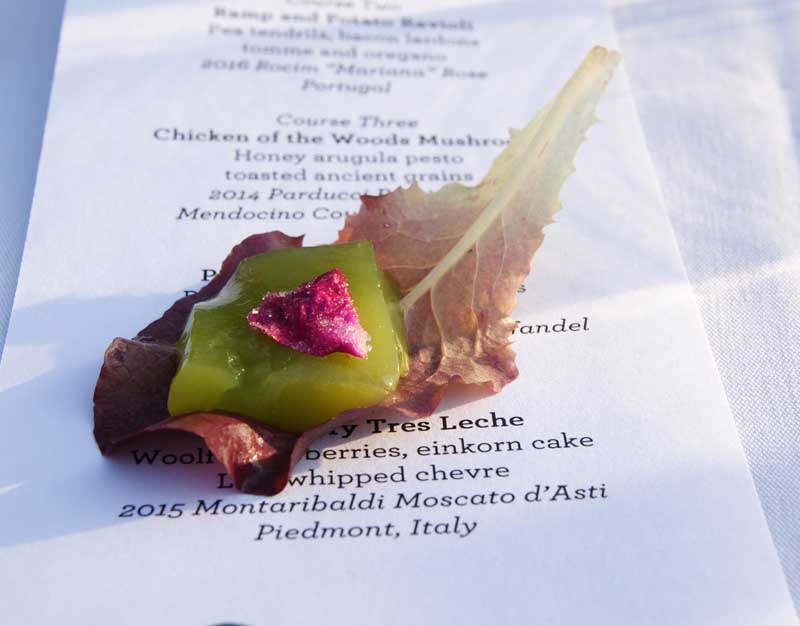 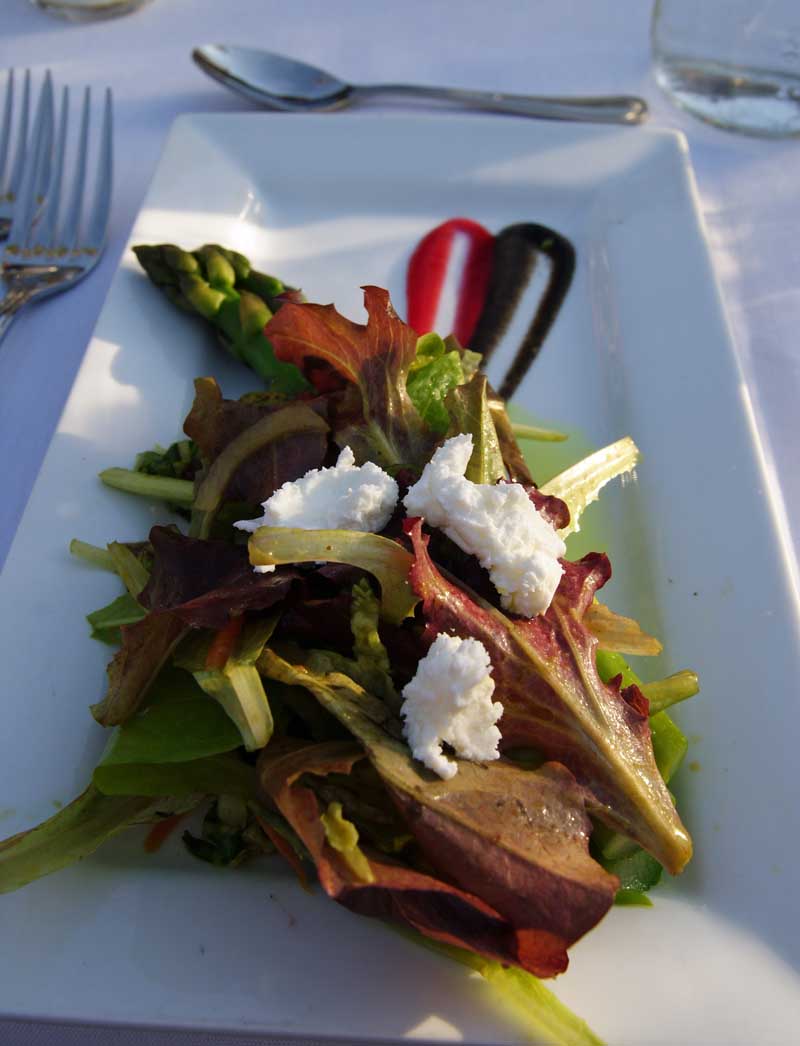 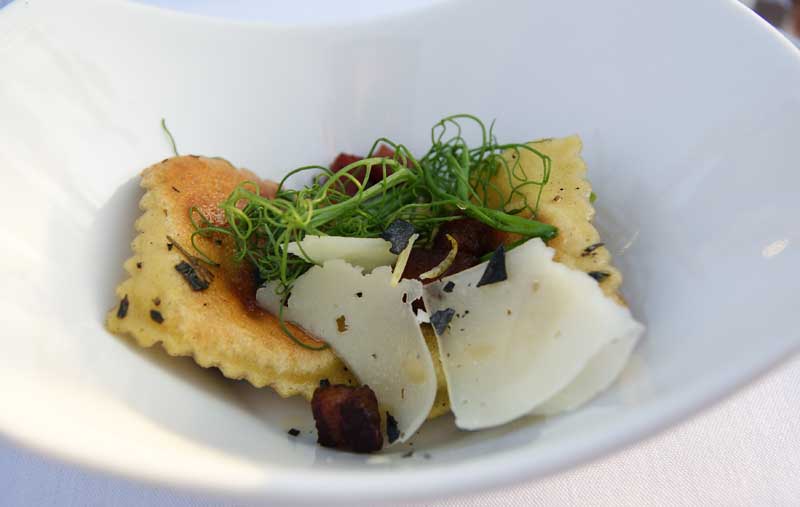 Third course: Chicken of the woods mushroom with arugula pesto and toasted ancient grains. A guy sitting near us didn’t eat mushrooms, but noted how delicious this was – didn’t even realize he was eating a mushroom until after the fact. 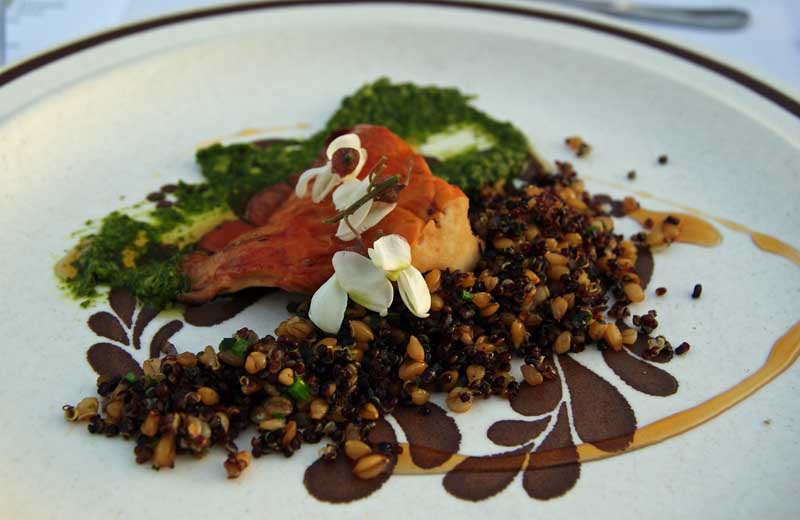 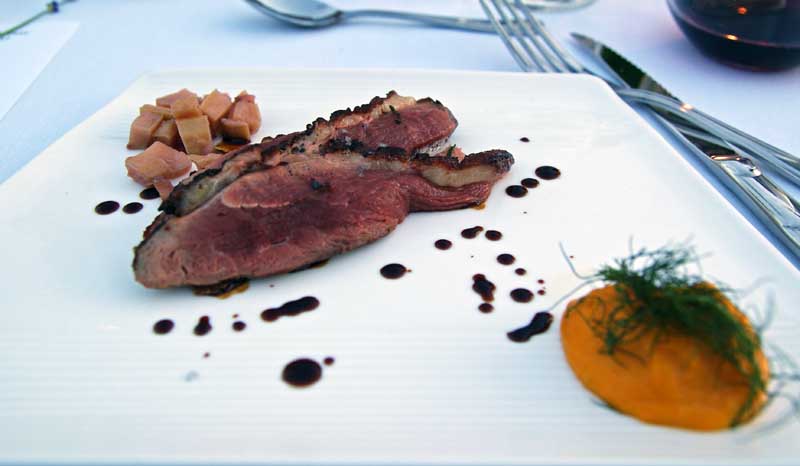 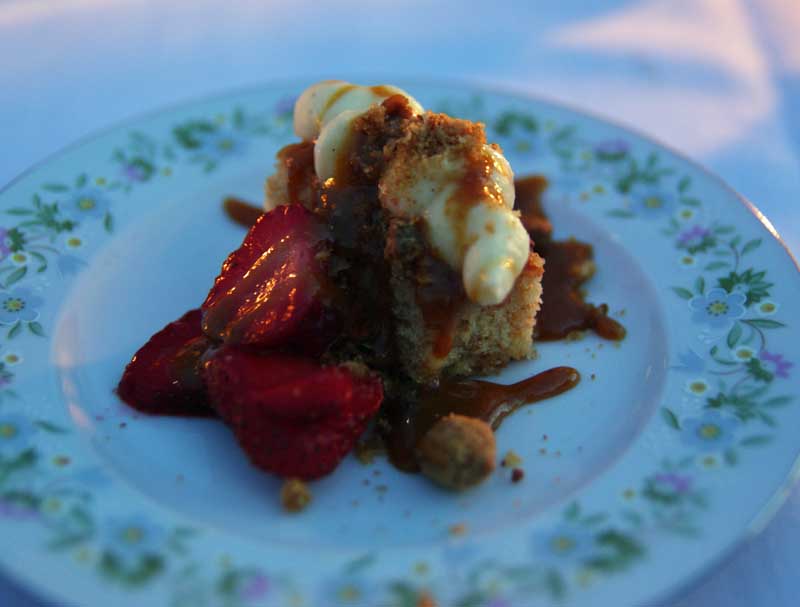 After the sun goes down: 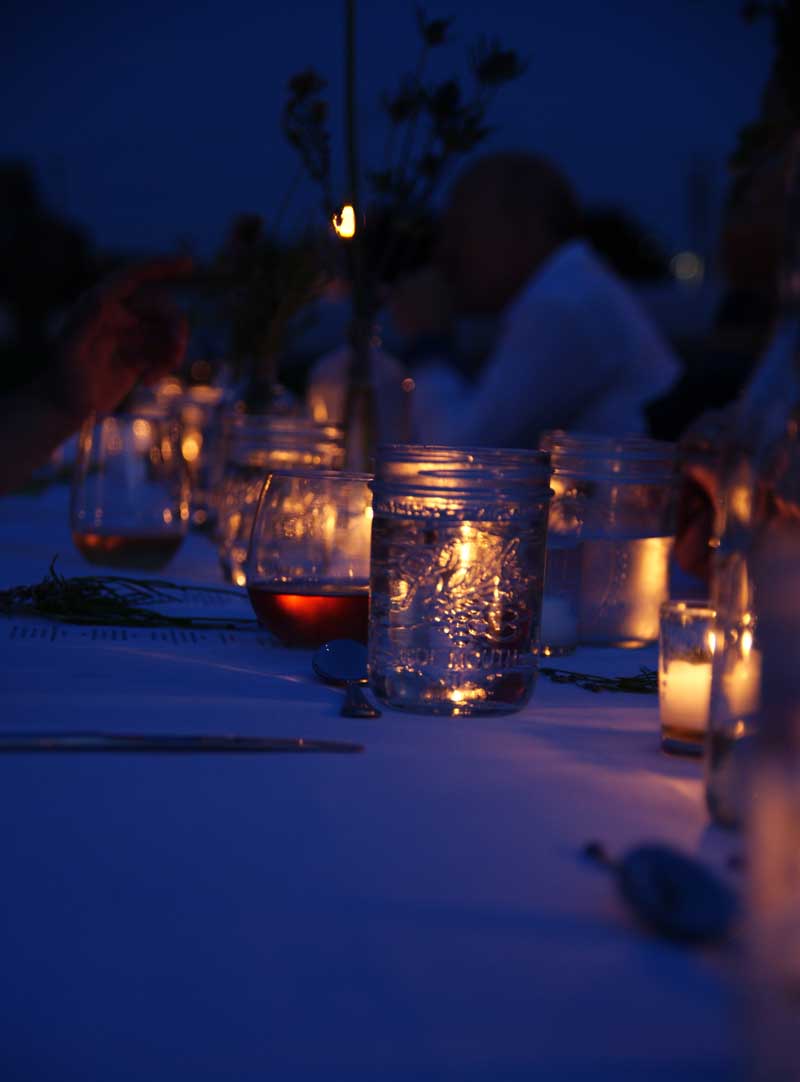 If you’re interested in donating, volunteering, or just want to learn more, visit https://www.refugeeresponse.org/. Thanks to Spice, Patrick, and Maggie for another wonderful outing, and as always, if you’ve never been to one of these, I strongly encourage you to check one out sometime!